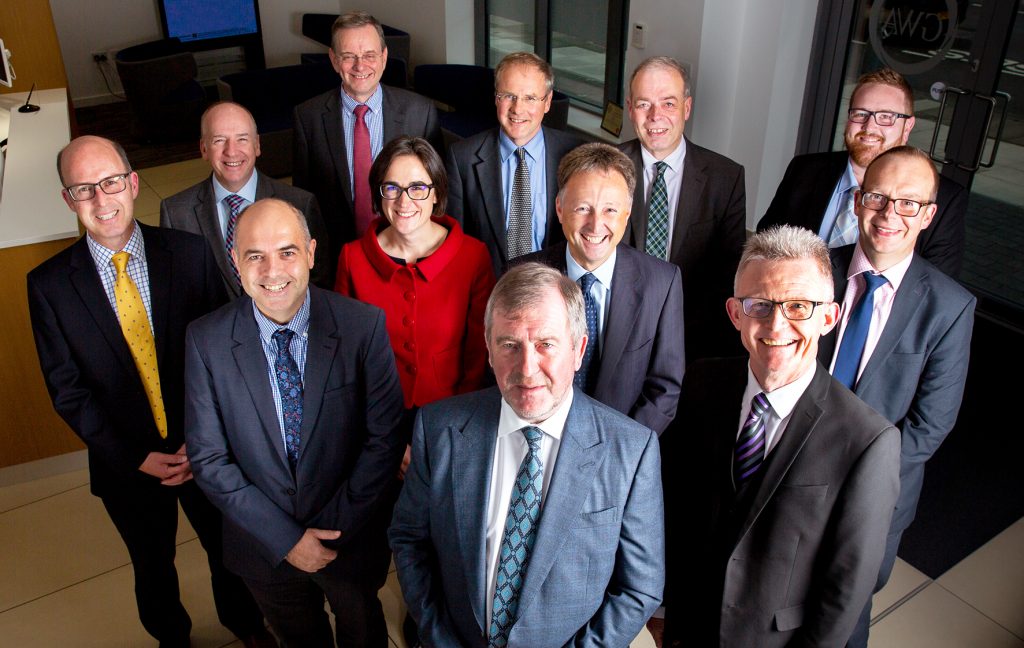 In 1918 as the First World War drew to a close Arthur Greaves signed a lease for an office at 1/3 Sandgate, Berwick-upon-Tweed. Greaves was an entrepreneurial accountant based in Newcastle and this was to be a further expansion of his practice which had branches in Alnwick, Amble and Carlisle.

“Greaves & Armstrong” opened its doors in 1918 trading as “Accountants, Auditors and Estate Agents”. It was initially manned by a small handful of staff lead by Francis Rowley, who was to become the resident partner, supported by John T Ayre, both of whom transferred from Newcastle. In 1922 Greaves split with his partner Herbert Armstrong and the Berwick office then traded under the name of “Greaves & Co.”

Over the 100 years since its original birth the association with other firms fell away and “Greaves West & Ayre” became an independent practice based in Berwick-upon–Tweed. The firm now employs around 110 staff at its Berwick office with another 10 at its Haddington office.

The entrepreneurial spirit of its founder thrives still in the modern practice. Whilst estate agency has been dropped, in addition to its core accounting and audit services it has built a strong tax team dealing with compliance and planning. The firm has also added new services such as wealth management and computer services support to its service offering.

The firm established itself in the inter war years and still acts for many families and businesses who came to them during that time. Arthur West became a partner as did John Ayre and the head count was around 7 in the mid 1940’s.

Disaster struck however in 1947, with the premature death of John Ayre at the age of 49 and this, coupled with the departure of a senior clerk, left the firm in a precarious position. Gordon Ayre, John’s son, who at that time was enjoying a career in the Royal Navy and had no intention of returning to Berwick, realised the firm had to continue if his mother was to get her annuity or she would be destitute. He resigned his commission and returned to qualify as fast as he could to help ensure the firm’s survival.

The following decades saw rapid growth of the firm and additional partners were enrolled through training and recruitment. Ian Davidson and Jim Coats became partners in the 1960’s with Brian Thomas becoming a partner later in that decade. In the 1970’s they were joined by Allan Rodger and Alick Hay. In the 1980’s by Alan Patterson and Peter Ayre, and then Andrew Ayre, Graham Hush, John Coats and Robbie Dalgleish in the early 1990’s. Colin Frame and Stuart Allister became partners in 1998. Stuart Faed, Craig Little and Roseanne Bennett joined as partners in more recent years. Richard Ayre, a fourth generation Ayre to become a partner in the firm, is the most recent having been invited to the position in 2017.

The firm out grew its original office, though this was maintained as its main office and postal address for nearly a 100 years. Various other properties around the lower part of Berwick were leased and acquired over the years until by the early 2000’s the firm was occupying six separate offices in the town centre as well as two off site storage facilities.

In 2017, after looking at many sites and options over a number of years, the firm was able to consolidate onto one purpose-built site in Walkergate, providing a better working environment for employees and clients alike. This also satisfied its desire to remain in the town centre supporting the businesses based there and near the railway station.

As well as achieving organic growth based on its philosophy of “Quality Advice, Quality Service”, the firm also grew by occasional acquisition and merger. In particular the acquisition of the practice of Fleming & Wood on the retirement of its remaining partner George Wood in 1993 expanded the Northumberland side of the practice. The firm already had a strong Scottish client base and the recent merger with Haddington based practice N C Campbell & Co in 2016, further strengthens the firm’s presence in the Lothians and ensuring support and succession for that practice. Ewan Millar & Douglas Gould became partners in the merged partnership.

Since moving to Walkergate, the firm has taken on a further 12 staff in full time roles and now acts for around 5,000 clients, filing 4,000 tax returns and acting for a range of clients from across the country with around 40% of clients based outside the firm’s immediate catchment area.

The firm prides itself in offering careers and training for local people, with around 25% of their employees studying towards recognised professional qualifications in areas the firm is engaged with. Many stay with the firm for long and rewarding careers and others use the skills acquired to pursue their careers elsewhere. Bringing in talent from across the country has meant that Greaves West and Ayre has a diverse cross section of partners and employees with over 50% of the firm’s professional fee earning staff being female.

The firm has adapted over the years as the world around it has changed and client needs have changed. Some of the more unusual roles the firm has played during the years have been as the Halifax Building Society agent in the town and the Danish Consular office. The years ahead will be challenging for everyone and will see professional service businesses further evolve to meet those challenges. But with its broad and talented partners and employees the firm is well placed to celebrate many more anniversaries in the decades ahead. The firm has already started to celebrate this special milestone in its history and we will be looking to commemorate this Centenary year over the next 12 months. We look forward to meeting the many people who have played a part in the last 100 years at these events and we look forward to providing the “Quality Advice – Quality Service” that has allowed it to thrive over its next 100 years.

Scottish businesses can receive financial support towards the purchase of a new or used electric vehicle.

Back in the Day!

As we celebrate the Queen’s Platinum Jubilee, we thought we would take a look at how life and some everyday numbers have changed.