The appalling human suffering we have seen across the media has dominated everyone’s minds during the first Quarter of 2022. The effect of the Ukraine crisis on markets has been considerable, with increased levels of volatility, a more acute inflationary squeeze and mounting bottlenecks in global supply chains.

Those of you who have watched our webinars during 2021, could not escape the fact that inflation has been a central theme. The conflict has further impacted the escalating cost of living, which has been also fuelled by the reopening of economies as countries learn to live with the presence of Covid.

The rollercoaster that has been the past two years, looks set to continue. At one point parts of the market were down 20%, followed by a limited recovery in March. Yields rose at a pace not seen in years. Bonds saw the worst decline in years as markets speculate how quickly central banks will raise interest rates.

Regional Overview
Developed market value stocks gained 1.4% through Q1 2022 whilst their growth counterparts fell by 8.22%. This was partly attributable to rising treasury yields as central banks delivered interest rate hikes in an attempt to subdue rising inflation. The US dollar saw a rally on the anticipation of rapid monetary tightening and gained around 3% against the Pound and the Euro.

UK: UK markets gained a little under 5% over the quarter. Returns were driven by oil, mining, and banking sectors within the large cap companies’ space. The strength in banks reflected expectations of rising interest rates, with the Bank of England increasing the base rate to 0.75% following two earlier 0.25% rises. Small and mid-cap companies lagged.

US: In the US, markets fell as consumer sentiment waned in response to rising prices. Russia’s invasion of Ukraine sparked sanctions from the US and other western nations, President Biden targeting the “main artery” of Russia’s economy by prohibiting oil imports.
Unemployment fell to 3.8% and wage growth came in at 5.1%, which was not sufficient to match the country’s lofty inflation rate of 7.9% (US Consumer Prices Index February 2022).

The Federal Reserve (Fed) increased interest rates by 0.25% and clearly signalled that there further hikes should be expected. It is increasingly predicted that this ‘hike cycle’ could see rates surpass the Open Market Committee’s previous ‘neutral rate’ of 2.4% by the end of 2023.

Europe: Eurozone equities fell sharply, which was not unexpected given the continent’s reliance on Russian oil and natural gas.

Germany suspended supply from the Nord Stream 2 Russian gas pipeline. The European Commission set out their ‘RePowerEU’ initiative to diversify gas supply, reducing Russian imports by two-thirds before the end of the year, and accelerate the transition to renewable energy sources. At the same time, the risk of an economic downturn because of protracted high energy prices caused further concern amongst investors.

Despite these headwinds, flash Purchasing Manager’s Index surveys in March showed strong resilience, with only a small pullback to 54.5 in March from 55.5 in February. Anything over 50 signifies expansion. 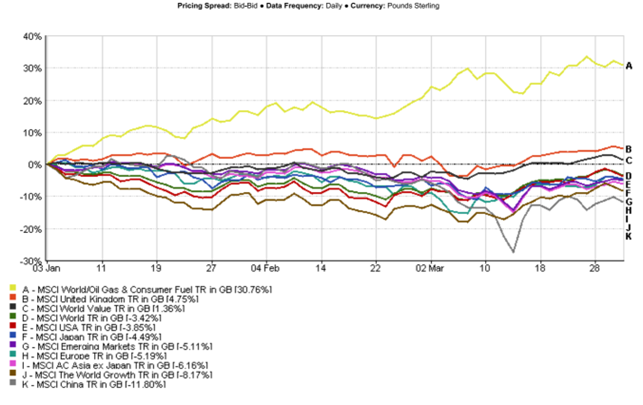 Summary
The first quarter of the financial year has proved to be particularly eventful. The Russia/Ukrainian war is creating a lot of fear and uncertainty and we expect this to remain as long as the war continues.

No doubt the topic of recession will climb up the economic and media agenda in coming weeks an months. It’s worth remembering that over the past 50 years the UK has seen six recessions and the US even more. Each time the market has recovered. As always, our advice is focus on the long term, and remember that a well thought-out financial plan can withstand periods of market volatility.

GWA Portfolio Returns
Our results for the rolling 12 months to quarter end are as follows:

Source: FE Analytics (31 March 2021 – 31 March 2022)
Past performance is not a guide of future returns. Portfolio returns are quoted net of fund management costs but gross of adviser and platform/custody charge. Figures are quoted in GBP terms.

Please note that the content of this review should not be considered investment advice or any form of recommendation. If you require investment advice, please do not hesitate to get in touch with a member of our qualified team.

The first Quarter of 2022 was dominated by the invasion of Ukraine continuing the market's rollercoaster ride.

We are celebrating being awarded 5 stars by an independent company who measure employee reviews.

We are welcoming many new faces and are sadly saying goodbye and good luck to some that are starting their retirement.