Despite a fairly strong start that was supported by second quarter earnings, this quarter has been a bit more challenging for investors, particularly during the last month.

Although there has been encouraging progress in vaccination roll-outs leading to some economic recovery, this has not been uniform across the globe. Rising commodity and freight prices, labour and capital shortages and rising energy costs have driven inflation higher, leading central banks to take a hawkish stance. We are reminded too that politics can be a powerful market influence, with regulatory crackdowns in China and a leadership change in Japan having opposing effects.

Regional Overview
United States: The US posted a small positive return over the quarter. Strong quarterly earnings data pushed prices up until August, supported by continued dovish Federal Reserve (Fed) tone. Both were unwound in September led by the Fed’s switch to a more hawkish stance, stating its tapering of asset purchases will be announced in November and conclude by the middle of next year.

The Fed also announced its expectation that US interest rates will climb to 1.75% by the end of 2024. This was more than the market had priced in, resulting in a rise of Treasury yields in the days following.

UK: UK equities also gained, although there was a disparity in performance across sectors: energy was the clear winner on the back of a strong recovery in crude oil, whilst highly valued consumer goods companies waned. The Bank of England adopted a similarly hawkish tone to the Fed, suggesting interest rates could rise by the end of the year. UK gilt yields steepened. 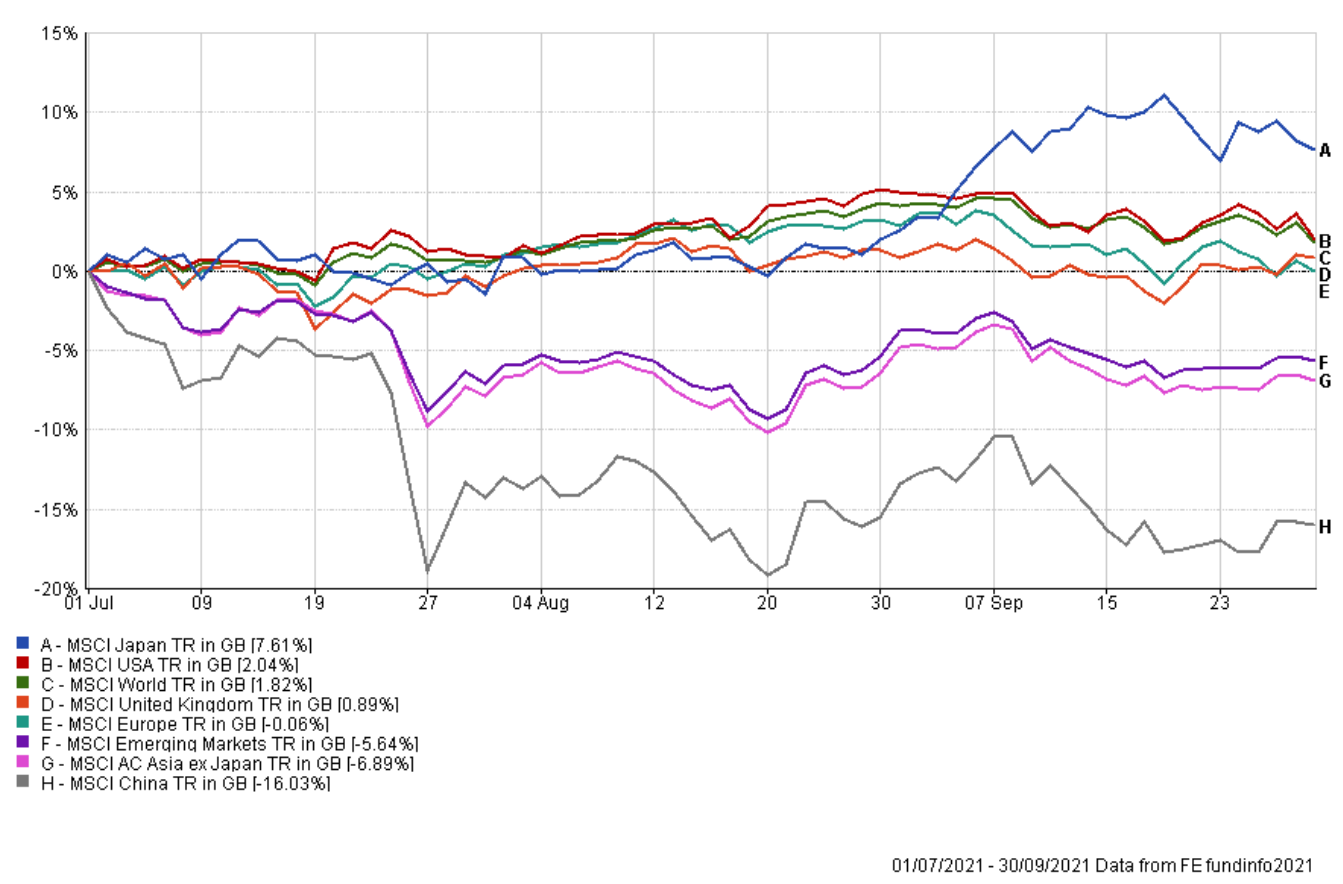 Asia:  Japan outperformed over the quarter, returning 7.6% in GBP terms. Japanese equities traded within a relatively tight range throughout much of July and August, gaining sharply in September following the surprise announcement that Prime Minister Suga was resigning. The election of Fumio Kishida as the new Prime Minister, a reopening of the economy in the wake of declining Covid cases and hope of further stimulus all pushed Japanese shares higher.

Constant bad news from China over the third quarter caused struggles within emerging markets. Regulatory crackdowns by the Chinese government on some of its most successful industries such as private tutoring companies and the technology sector, was swiftly followed by the news of the potential default of global Chinese property developer, Evergrande. These events culminated in a significant sell-off – dubbed ‘Bears in a China Shop’ – with over a trillion dollars wiped from the value of Chinese companies.

Some other regions in Asia, primarily India, performed well over the quarter.

Summary
As we predicted in our last update, the third quarter of 2021 has been somewhat turbulent. So is this the end of the fairy-tale for investors?

It is certainly a time for some caution going forward, as we keep an eye on inflation and interest rates and whether supply chains will ease. There are likely to be a few surprises in the markets, probably good and bad, so diversification is key. Overall though, vaccination progress and fiscal stimulus should be a solid platform for growth. It is important to focus on the long term and remember that a well thought-out financial plan can withstand periods of market volatility.

All of our advisers, are contactable on their usual phone numbers and email addresses. If you have any queries or require investment advice, please do not hesitate to get in touch.

GWA Portfolio Returns
Our results are summarised against benchmarks in the following table.

Source: FE Analytics (30/09/20 – 30/9/2021).
Past performance is not a guide of future returns. Portfolio returns are quoted net of fund management costs but gross of adviser and platform/custody charge. Figures are quoted in GBP terms.

Please note that the content of this review should not be considered investment advice or any form of recommendation.

The first Quarter of 2022 was dominated by the invasion of Ukraine continuing the market's rollercoaster ride.

We are celebrating being awarded 5 stars by an independent company who measure employee reviews.

We are welcoming many new faces and are sadly saying goodbye and good luck to some that are starting their retirement.