Following a severe sell-off in the first quarter of the year, the second quarter proved to be very strong for equity and credit markets alike.  The markets were bolstered by the huge stimulus provided by global central banks and were further buoyed by the reopening of economies. Additionally, risk hedges, such as sovereign debt and gold, continued to perform strongly, with US treasuries up circa 9% and gold around 18%.

Over the quarter, the FTSE All World, which measures the price movements of some 3,100 companies in 47 countries, gained 19.6%. The price movements of other major global indices have been similarly impressive, as highlighted in the graph (click on image for bigger picture): 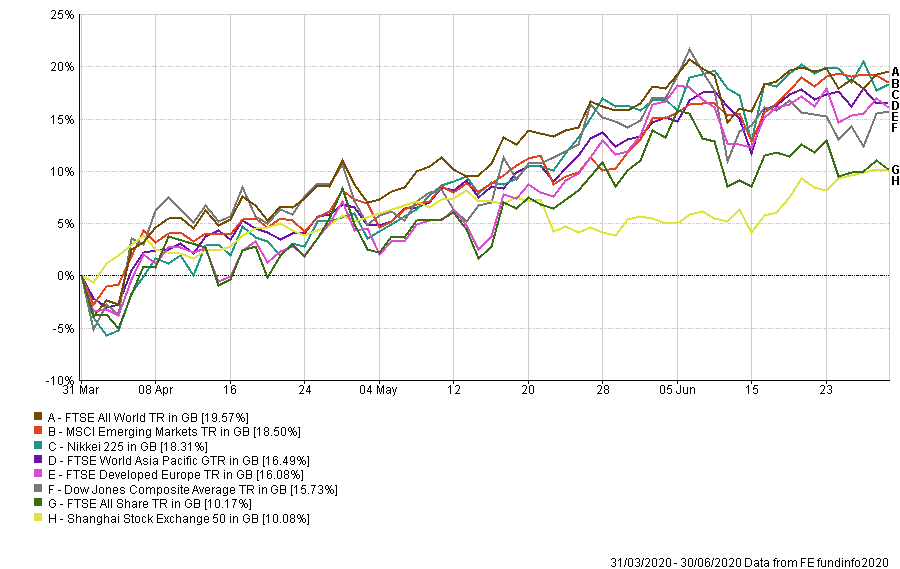 Signs of a sharp rebound following the reopening of economies are reflected in recently published sales data.  Retail sales in the UK increased by 12% month-on-month through May, whilst comparative US data showed a 17% rise. Sales in both countries remain down year-on-year, but the pace of the rebound is nevertheless apparent.

Other positives include clear intent from global central banks to keep government and corporate borrowing costs low.  The Bank of England upped its quantitative easing programme by a further £100 billion, pressing 10-year gilts to a 0.2% yield.

Though initial concerns regarding a liquidity crisis have thus far been avoided, solvency risks remain. Central banks are willing to lend, but cannot ultimately spend. As a result, companies with solvency issues remain at risk of administration, some high-profile examples of which we have unfortunately witnessed during the quarter.

In addition, we remain without an approved COVID-19 vaccine. Although certain regions have seen reported virus cases falling to low levels,  principally Asia, Australasia and developed Europe, the infection rate is rising again in the US.  Latin America in particular also appears to be struggling to contain the spread.

Further risk comes in the form of governments prematurely retracting their stimulus measures.  One example is the UK’s requirement that companies contribute to furlough scheme costs from August, with the scheme expiring entirely in October. It is unclear whether the virus will be under control by this time, or the labour market will have suitably recovered. It could follow that some furloughed workers become unemployed in coming months.

Though many market indices appear to be pricing in rapid economic rebound, it is worth observing the differences of fortune between companies by sector. An obvious example would be the year-to-date performance of online retailers relative to hospitality and airline stocks, the former having performed extremely strongly relative to the latter. More generally, it is important to be aware, despite what the headline index may suggest, that many companies are not entering the second half of the year at the same position they were at the turn of it.

In terms of portfolio performance, our results for the quarter are summarised below:

Source: FE Analytics (31/03/2020 – 30/06/2020). Past performance is not a guide of future returns. Portfolio returns are quoted net of fund management costs but gross of adviser and platform/custody charge.

Generally, our liquidity preference, or temporarily high cash allocation, has weighed on returns relative to benchmark over the quarter. It is however tempered volatility, which we are confident our clients will see the benefit of in light of the turbulent backdrop. Though short of the mark in absolute terms over the quarter, relative returns over the longer-term are considerably in our favour on both absolute and risk-adjusted bases.

To summarise, markets have rallied over the second quarter, spurred on by continued stimulus and the reopening of economies. Though central bank and government support appears unlikely to be fully withdrawn for some time, there are suggestions that it may be reduced in certain countries. If withdrawal happens to be premature, there will inevitably be negative consequences.

Rising infection rates in certain parts of the world, coupled with the continued absence of an approved vaccine, also means renewed social distancing measures could come into force, with further economic impact. In light of this, we continue to favour quality companies with resilient business models and balance sheets to match.

All of our advisers, although working from home, are contactable on their usual phone numbers and email addresses. If you have any queries or concerns, please do not hesitate to get in touch.

We would point out that this past performance is no guide to future performance and that markets can fall as well as rise.

Please be aware that your capital will be at risk when you invest, and that you may get back less than you invested. Greaves West & Ayre Wealth Management is a division of Greaves West & Ayre, a firm authorised and regulated by the Financial Conduct Authority for Investment  Business (FRN 100825).